“The world is a beautiful place. Every minute, every second. We are so lucky. But it is up to us, up to our decisions on what we do, on what we think, on what we say. It is in our hands.” 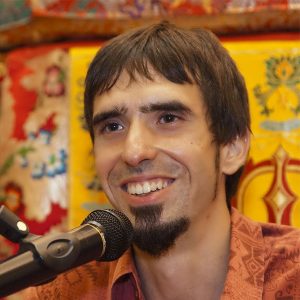 The recognized incarnation of FPMT’s founder, Lama Thubten Yeshe, was in his early life known as Lama Osel. Today he prefers to be called simply “Osel.”

Tenzin Ösel Hita Torres was born in 1985 in the village of Bubión at the foot of the Sierra Nevada, southeast of Granada, in southern Spain, to students of Lama Yeshe – Paco Hita and Maria Torres.

Ösel was enthroned as the reincarnation of Lama Yeshe in March 1987. In 1991, when he was six years old, he began life at Sera Je Monastic University in South India, where he lived and studied until he was 18. Ösel then made the decision to leave monastic life to explore modern ways of life and thinking.

Ösel shares his thoughts and ideas with the people he meets around the world – in coffee shops, Dharma centers, on the beach, in the mountains. This planet is his home, a place where we all have the opportunity to help each other, every minute of every day.